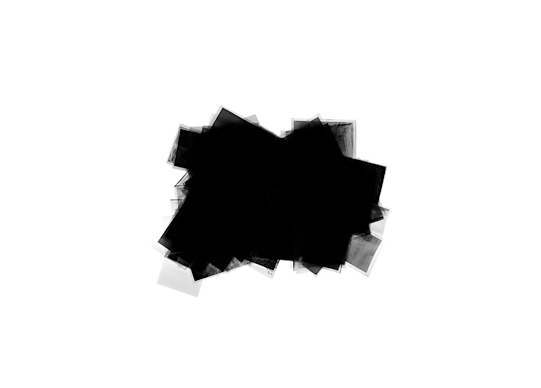 Viewing the installation SPEKTRUM* from Katrin Kamrau, it is almost as though one has arrived at the end of photography. What is there left to say with pictures…? Both a climax and an endpoint seem to be portrayed in the way the photographer photographs photography – its equipment, its rooms, its charming poses. And its illusions. Pictures behind pictures showing how pictures are made which we (because be have to) want to think are real. About the documentary and illusionary in photography, others have already written.

When one views Katrin Kamrau’s installation SPEKTRUM* , it is very quiet. And almost a little bit like dipping one of Proust’s Madeleines in lime blossom tea – for all of a sudden, you hear the photographs. I don’t remember many of the pictures that I myself once shot, but I remember the sounds.

I got my first camera when I was a schoolgirl. It was a loud, rattly thing which rolled the film with a sound as though it wanted to tear off every single frame. Before I graduated from high school, my parents gave me an Olympus which I was very proud of. The light snap of the shutter sounded elegant and somewhat onerous, like the tracker action of an organ. (And just as organists despise electronic tracker action, the idea of digital photography would have been as absurd and abhorrent to me.) The short hiss of the flash and soft whimper of the film rewinding – all this still rings in my ears, along with the worry that once again the pictures I took didn’t turn out.

For a while, I used a digital camera. My husband had programmed it so that birds chirped whenever I turned it on. When the lens, with a small, obscene movement popped out of the matchbox thin camera body, it peeped – an acoustic return to the days when, in order to get hem to stay still with their frozen grins, children where promised that a birdie was about to fly out of the camera. With the digital camera, I didn’t actually take pictures anymore – I used it to make reproductions along with a few still-lifes at our holiday cottage and a self-portrait in the mirror. In fact, I only used it to hear it peep.

Anyone who has worked in a darkroom, like the one Katrin Kamrau presents us (first as a bright workshop, and then as a secret laboratory), will remember its sounds: the grating of the developing tank being opened, the rushing of the unwinding film (as if one were moving through a marsh of reeds), the soft clang of the metal tongs laid on the tubs of developing and stop baths, and the joyful silence when in the red dim, a image finally emerges on paper.

All of this I hear when I move through Katrin Kamrau’s installation SPEKTRUM*.